Do I Dare Say It Out Loud? 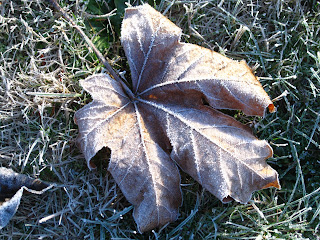 Seems like when something good is happening or about to and you say it out loud the powers that be go "uh uh. Not  this time". So before I start this blog I am going to knock on wood, virtually. KNOCK KNOCK!

Unlike last year when we had unheard of snow in November and off and on through the end of April (also unheard of) we have had nary a flake this year. We have had a few days of hard frost in the 20's but mostly the weather has been averaging between 35 and 45 at night and 45 to 55 during the day. That's not to say we couldn't still get a snow fall in January but that would be TOO normal. January is when we normally get at least one snowfall. However today I saw a robin out in the yard. Now around here you usually don't see robins until early March which makes this guy 2 months early. To top it off grey whales have been seen in the hundreds off the coast of California (a full two months early) and we have had a couple surfer shark attacks in southern Washington, also unheard off. I think one was even a great white.  My seed potato are sprouting eyes already (almost two months early) another harbinger of spring and I actually have an old sweet potato that has sprouts on it. Can you say global warming? 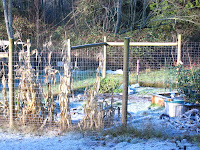 I never did get the garlic planted but it has been out in the garage (so it has had the required cold time) so if I plant it soon there may still be a crop this summer. The garden is a mess because I didn't have the time to clean it up but with reasonable weather perhaps I will get the chance. 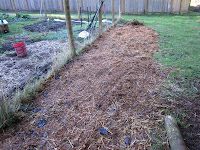 I have been dumping decomposing, bird poo laden straw and bedding chips in the area outside the garden's fence where I intend to place the potato towers this year. (See March 18th post 15 days and counting) I have decided to use brown grocery bags to hold the soil inside the towers because it was easier to install, cheaper than straw, gives me more room inside the towers, and the bags do eventually compost down. The bags don't leave the nice compost that straw does but I am using a thick layer of straw and bedding chips from the birds coop on top of the turf  to kill the turf and weeds before installing and filling the towers with soil. After the potatoes are harvested I will spread the soil around on the composted straw/chip mix and hopefully have a nice little garden area that I didn't have to kill myself digging out the turf.

The ducks are laying eggs better than the chickens and Jezebel keeps trying to hide a nest from me. I think she is going to be a problem. I noticed that the geese are acting strange and that concerns me since I have two males and two females and the males could fight with devastating results. I love Sebastian but he is not the Alpha male. Alphie is and he is the biggest. Hopefully breeding season for them will be short. As much as I love babies in the spring I don't like the resulting fights that seems to go along with bird breeding.

So you are probably wondering about the cold frame. I have been adding leaves, manure from the birds and 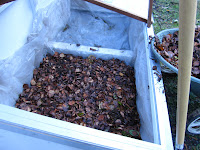 old straw to the bottom of the frame and mixing in blood meal, bone meal and some lime in hopes that it will compost down and provide a little heat in the process. My next step is to go get a load of 3 way mix next week and fill the box with soil. I will use the rest of the three way mix to set up the potato towers and get them ready for planting in march (or earlier depending on the weather). It is my intent to plant cool weather greens such as lettuces and spinach in the cold frame as soon as I can.

So now that I have said it lets see what mother nature decides to throw at me in the new year. If she does get bitchy I always have my unread stack of books, my garden planner and seed catalogs, and the never ending projects in the house.
Posted by sista at 4:43 PM 2 comments: