Squeaky Chick Gets the Treat

I've been gone for a week for spring break leaving my chickens in the care of The Mans 20 year old son. Not that I didn't have confidence in his ability to make sure each and every chick would be cared for as thoroughly as I would myself. After all, he was told by a few people that he better not screw this up or he would never live long enough to regret it. I must have quite the reputation.

Two days before we were to leave one of the light Brahmas (Squeaky) did something to her toenail breaking off the tip and leaving the quick exposed and very bloody. If you know anything about chickens you know that the rest of the flock will not leave this alone and will peck at a wound on another bird until....well the unthinkable could happen. So I brought her up to the house and soaked her toe in an Epsom salt bath. Chickens love a warm foot soak. They protest when you first put their feet in it. Then they fall asleep so you have to hold them up so they don't sit down in the water. Having dressed her toe with a little antibiotic salve  I  handed her to my youngest daughter to baby sit until I could return her to the hen house. This meant Squeaky spent the afternoon wrapped in a towel, sitting on my daughter's bed looking at Facebook. Just before I had to start dinner Squeaky was brought downstairs and placed in a cat carrier with a wire front to watch tv with The Man. She really seemed to be enjoying the attention. She was hand fed, warm, entertained, and didn't have to deal with the nasty bitches in the coup that were trying to kill her. Guess I would feel the same. Daughter #2 and the oldest came home just in time to gleefully sweep Squeaky up to her room for the night.(in the cat carrier) By the next day Squeaky's toe was better and after enjoying a quick breakfast on the kitchen island (also in the cat carrier) she was carefully taken out to the palace and reintroduced to her flock. The quick had shrunk into what was left of the toenail and there was no sign of blood. Just in the nick of time since we were leaving that morning on our vacation. Squeaky returned to her friends in the palace and we along with the family dog squeezed into the family station wagon for our trip. 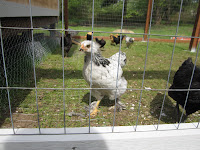 Twice a day I called the son to check up on the chicks. No I wasn't worried he wouldn't do the job. I just wanted to make sure I was available to answer any questions about any possible problems that might pop up while I was gone. Uh huh. OK so maybe it was more to make sure he hadn't forgotten to do something he was supposed to do. At any rate after outrunning near blizzard conditions with out the required traction tires and making it through the mountain pass just ahead of it being closed we made it home. I headed down to the palace to see how they had all fared in my absence and guess who was waiting at the gate. You guessed it. Squeaky. I took some treats into the chicken run and sat down to get reacquainted with the ladies mostly because I want them to be friendly and tame when they grow up. Squeaky had no problem with this and promptly hopped up on my knee to see if she could hoard all the treats. She's no dummy. 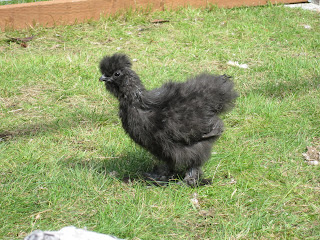 However we do have one chick that I am sure was born without a brain. This little girl (or boy) just has nothing going on upstairs and to make things worse she looks like a clown. She is a blue silky technically but her color is more of a dark grey. I have a feeling she is going to be the subject of future blogs. So on that note I am going to sign off on this post and leave you with a picture of our little clown.
Posted by sista at 9:02 PM No comments: